The Commemoration of the Yartzheit of the Partzeva Rebbe (OBM), Rebbe Nosson Dovid Rabinowich, ( 7 Shevat 5777/February 2, 2017) 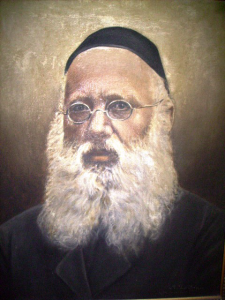 This past Thursday evening ,7 Shevat, 5777 (2/2/17), at 8:30 pm, the yarzheit of the Partzeve Rebbe was commemorated by his grandchildren and sponsored by his grandsons, the Dinover Rebbe, shlita and Rabbi Dr. Nathan David Rabinowich at a “tish” in the Dinover Beis Medrash at 77 Wallabout Street in Williamsburg, Brooklyn, New York.

It is now eighty-seven years since his passing and B”H he has even merited a fifth generation of religious grandchildren! Although many of his children, Dr. Rabinowich’s uncles and aunts, perished in the Holocaust, five of them miraculously survived those terrible years and have left a few generations of descendants, some of them who are still Shomer Shabbat! It is not very known but the Partzever Rebbe zt”l was probably led the third or fourth leading Hassidic Court in Poland. Of course, Ger was #1 , followed closely by Alexander .

Those that perished in the holocaust ( May Hashem avenge their deaths) :
1)From his first wife, Leah Raizel, daughter of Rebbe Yechiel Yaakov of Koznitz

The Partzeva Rebbe left his “Divrei Torah” in manuscript and were first published in 1983, fifty-three (= Gan Eden) years after his death by Rabbi Dr. Nathan David Rabinowich. In 2012 , Dr. Rabinowich published a second edition with many additions including one of the most complete genealogical works dealing with Polish rabbis and Admorim. It also includes a fascinating essay entitled: “Partzeva of Below and Partzeva of Above” by his son, the Munkatcher Rebbe, Rebbe Baruch Y.Y. Rabinowich, ZT”L. This new edition, published with the enthusiastic support of Reb Tzvi Ysrael Snider Esq., of Baltimore, includes a beautiful introduction to the genealogical section, elaborating on the importance of ‘holy lineage, ’ by the Munkatcher Rebbe, mentioned earlier.

May the Partzeva Rebbe’s holy memory be blessed.

Nathan David (Nosson Dovid) Rabinowich is an author of thirteen critically acclaimed scholarly books and hundreds of articles. He is an expert on Jewish History with extensive teaching experience at the high school and university levels. Nathan has lead as a CEO and Scholar in Residence in such as ventures as the Jewish Heritage Tours to Western Europe, Canada, and Africa.
View all posts by Nathan David Rabinowich →
This entry was posted in Nathan David Rabinowich. Bookmark the permalink.